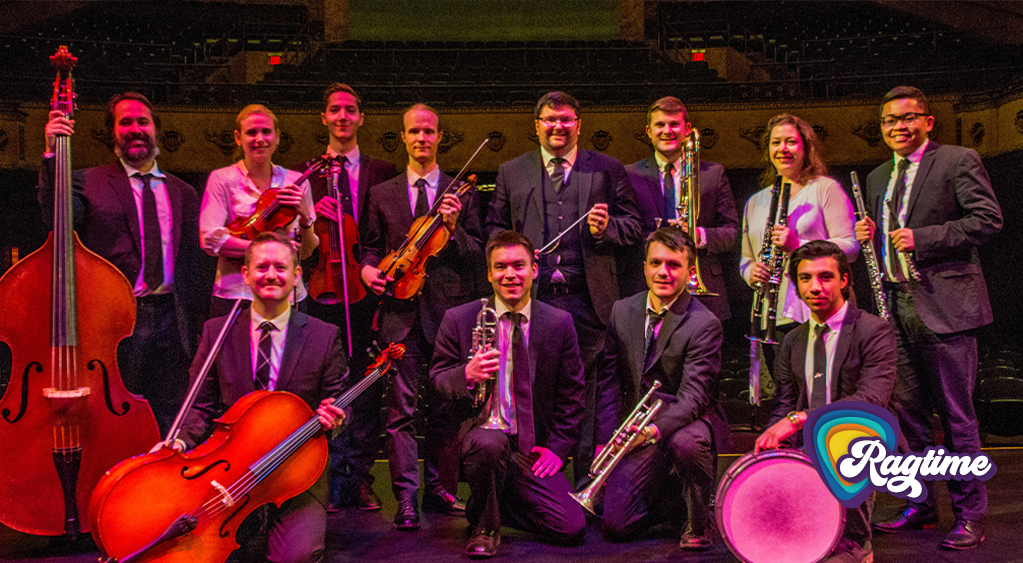 This performance has been made possible by the National Endowment for the Arts through Arts Midwest.

Hailed by the press as “the premier American ragtime ensemble”, the Peacherine Ragtime Society Orchestra (PRSO) is rapidly becoming the leading professional ragtime orchestra in the United States. Formed by young virtuoso Andrew Greene at the University of Maryland, the PRSO recreates the syncopated stylings of a bygone era – ragtime, theater and dance music, as well as underscoring classic silent films using Mr. Greene’s collection of over 15,000 musical selections.

PRSO has repeatedly appeared at leading venues including The Kennedy Center, The Library of Congress, The American Film Institute, and at historic theaters, performing arts centers, colleges, universities, and concert associations across the United States. The PRSO’s work has been featured in documentaries, online video, and on radio and podcast programs across the country. Their website is www.peacherineragtime.com

Peacherine’s Founder and Director Andrew Greene is a leading authority on orchestral ragtime and silent film accompaniment. Mr. Greene founded the Peacherine Orchestra while a freshman at the University of Maryland, hoping to draw attention to this neglected but historically important music.

He is the curator of the John S. Maddox, Arthur C. Ziegler, E.J. McBride, Katherine Lingham, Louis H. Burns, Palm Leaf Ragtime Orchestra, Silver Cornet Ragtime Orchestra, and Rochester NY area theater orchestra collections, along with his own personal collection of orchestrated ragtime, silent movie music, theater and dance selections, piano solos, and records. The collection totals over 15,000 selections from 1862 to 1950, with an emphasis on the music of 1880 to 1929.

Mr. Greene has appeared at leading venues including The Kennedy Center, The Smithsonian Institution, The Library of Congress, The American Film Institute, and has traveled across the United States to perform, conduct, and lecture on the music of America’s past.