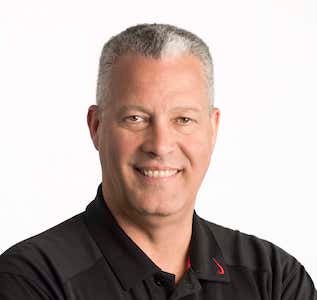 Paul Keels - The Voice Of The Buckeyes

Paul Keels’ booming voice fills rooms and cars with an unmistakable beat. His crisp play-calling on the radio of Ohio State football and basketball never leaves the listener in doubt. It’s graphic, efficient, and spot-on.

Keels is now inextricably linked with the Buckeyes whose games he’s called for a score of years; through two national titles and three trips to the Final Four.

Players and coaches come and go. Yet schools’ longtime play-by-play announcers are as recognizable as the teams they cover. Fans think of them as longtime friends, those who share in the joy of victories and commiserate in the misery of defeats. They are forever part of the tapestry, drawing pictures of the familiar and the unfamiliar.

In this unimaginable world of digital conveniences, picture painting on radio is a disappearing art. For years, radio was a necessity. It kept fans abreast. Still, today, there are many vibrant announcers who’ve presided over their friendly microphones for thirty or more years. They get it. Each one is an artist with his own distinct brush and palette.

Keels doesn’t have any shtick or use signature phrases. He calls games naturally, no customized script. He’s always cognizant of the fundamentals. As teams break huddle for virtually every play from scrimmage, he gives the score and time remaining. Ditto for hoops on every change of possession. The broadcasts don’t turn into a talk show.

Paul's book "If These Walls Could Talk", recollects his years with Ohio State’s football and basketball teams. He shares stories of the coaches he’s covered, some of the big players with whom he interacted, and naturally, some of the big moments he witnessed.

Play by Play For “The Basketball Tournament” on ESPN TV.

“If These Walls Could Talk; Stories from the Ohio State Locker Room, Sidelines and Press Box.” 2018.