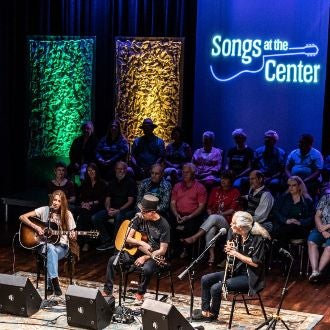 Songs At The Center Live Taping

The Niswonger Performing Arts Center hosts a taping of the PBS series, Songs at the Center, on Thu. Sep. 16, at 6:30 pm and you can be part of the Live Audience.

The series, which has been seen on more than 385 stations and is hosted by songwriter Eric Gnezda, will feature fellow songwriters Carrie Newcomer, Over the Rhine, and another artist to be announced.

The Niswonger Performing Arts Center joins other Ohio concert halls in the series, whose purpose is to showcase the best songwriters in America in Ohio’s finest venues.

"Van Wert Live at the Niswonger Performing Arts Center is honored to be a featured venue on Songs at the Center,” said Tafi Stober, Executive Director of Van Wert Live Venues. “This opportunity to be a backdrop for the story behind the song has a deep purpose as it highlights the entertainment industry from a different perspective, the artist's heart."

“We’re pleased to be working with the top-notch crew at The Niswonger,” said Executive Producer, Jack FitzGerald. “Our show highlights the songwriter and their stories. We’re pleased to bring the show to Northwest Ohio, where we welcome an enthusiastic audience.”

Songs at the Center is taping its eighth season, and has welcomed John Oates, Rodney Crowell, Janis Ian, Jim Brickman, and Delbert McClinton, among others.

Songs at the Center celebrates The Song. The Songwriter. And Their Stories. The show features Songwriting Royalty, as well as other artists you’ll want to get to know better. The series is taped before a live audience, in an interview/performance format, where singer-songwriters sit down with series creator and host, Eric Gnezda, for a chat and a few songs.

For more information on Songs at the Center, please visit: songsatthecenter.tv.

Alert the Facilities Manager of any special considerations. The Niswonger Staff is ready to assist with entry to and from the show. Please contact the Box Office in advance at 419-238-6722 or [email protected].

Advanced event ticketing, a 10% discount and a driver comp ticket are available for groups of 10 or more. Arrangements must be made through Jerry Beard, Box Office Manager, 419-238-6722 or [email protected].