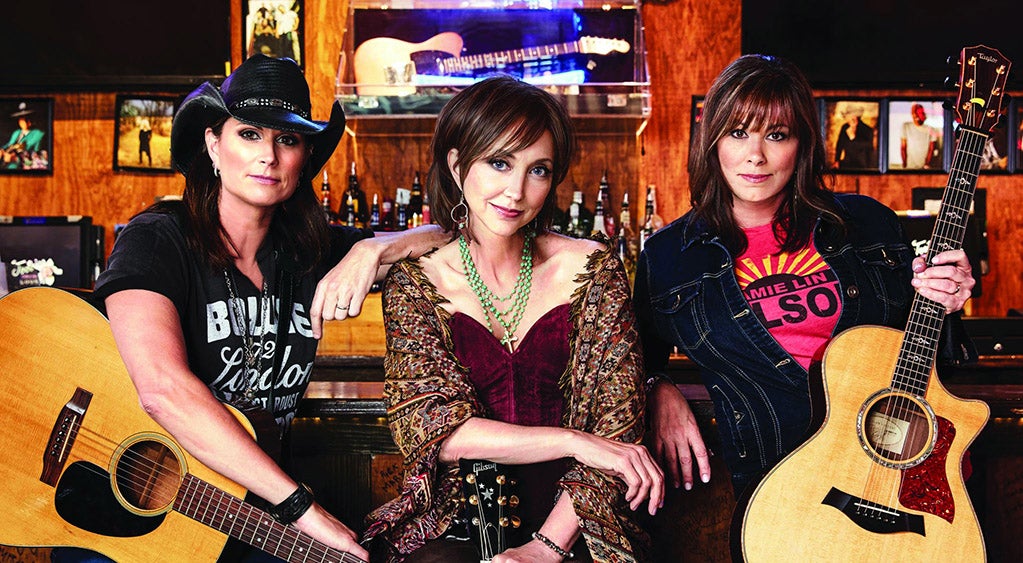 With 36 top 10 singles between the three stars, there’s a lot of hits to pull from. The powerful combination of talent is unparalleled; with over 10 million records sold, and numerous GRAMMY, ACM, CMA, and CCMA awards. Three guitars, three stars, singing together all night.

Terri Clark, Pam Tillis and Suzy Bogguss met during their meteoric rise on the country charts in the 1990s – a time when female artists were celebrated, yet were often pitted against each other. The three chose to forge a friendship, and never lost focus on their music. Now, their “Chicks with Hits” tour provides a unique opportunity to experience all three amazing artists at once.

Hailing from Medicine Hat, Alberta, Canada, Terri Clark is a three-time JUNO Award winner and eight-time CCMA Entertainer of the Year and she has taken home the Female Vocalist of the Year award five times. She still holds the honor of being the only Canadian female artist to be a member of the Grand Ole Opry. Terri has sold more than 4 million albums worldwide and has made her mark on radio with 13 Top Ten singles – hits that include “Better Things To Do,” “Poor Poor Pitiful Me,” “Girls Lie Too,” and “I Just Wanna Be Mad.” Terri is host of Country Gold, a four-hour Classic Country radio show that airs on more than 100 stations across the US and Canada. In 2016 Terri brought her critically acclaimed “Back to My Roots Solo Acoustic Tour” to Canada. The 40-city tour traversed Canada from Prince Edward Island to British Columbia and showcased Terri’s hit songs in an intimate acoustic setting with stories and laughs along the way.

As the child of Country Music Royalty, Pam Tillis was determined from a young age to find her own way in music as a singer and songwriter. Pam has always insisted on writing and cutting songs that speak from the soul. With six number ones and 14 top ten singles, Pam knows all about breaking the platinum barrier.  With more than 30 singles charting on U.S. Billboard charts and selling more than 7 million copies of her studio albums, Pam’s critical acclaim has not diminished.  Sony Records “It’s All Relative” (a tribute to Mel Tillis) was USA Today’s #4 Country Album of the Year and most recently Pam has released three albums from her own record label Stellar Cat Records landing her a #1 on the European ECMA Chart. Pam is a 15-time CMA nominee and two-time winner, a nine-time Academy of Country Music Award nominee, a two-time Grammy award winner, and six-time Grammy nominee, an American Music Award’s nominee.  Most recently, a two-time IBMA nominee and one-time winner. As a songwriter, Pam’s songs have been recorded by respected names throughout all genres of music, including Chaka Khan, Juice Newton, Dan Seals, Gloria Gaynor, Conway Twitty, and Highway 101.  She is currently a reoccurring guest on the TV show “Nashville,” performed an extended run on Broadway in New York in Smokey Joe’s Cafe, and is a proud member of The Grand Ole Opry.   Pam Tillis’ star continues to shine brightly in the third decade of her career.

During the creative explosion that was country music in the 1990s, Suzy Bogguss sold 4 million records with sparkling radio hits like “Outbound Plane,” “Someday Soon,” “Letting Go,” and “Drive South”. But you can’t peg Suzy that easily. In the midst of her country popularity, she took time off to make a duets album with the legendary Chet Atkins. In 2003 she made an album of modern swing music with Ray Benson of Asleep At The Wheel. An album of original music in 2007 landed her at #4 on the jazz charts. Her folk music roots show through in her frequent appearances on public radio’s A Prairie Home Companion, in the Grammy she earned for her work on “Beautiful Dreamer: The Songs of Stephen Foster,” and in her critically acclaimed album and book project from 2011, “American Folk Songbook.” In 2014 she released “Lucky,” a collection of songs written by Merle Haggard and interpreted through Suzy’s crystal vocals from the female point of view. Her latest offering, “Aces Redux,” is a re-recording of her platinum-selling album Aces produced by Suzy with fresh arrangements and her signature sparkling vocals.

VWLive Event and Membership information can be found at vanwertlive.com or through the Box Office by phone 419-238-6722 or in-person from Noon - 4 PM, Tuesday through Thursday, and Noon - 6 PM on Friday.