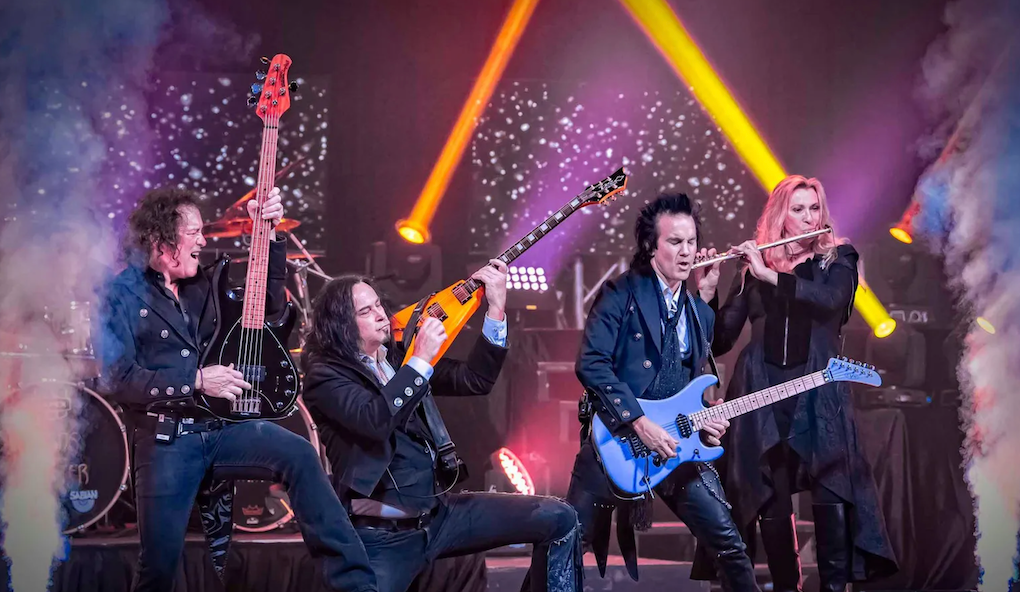 Entertainment Is Alive In Van Wert: It's A Christmas Rock Extravaganza This Sunday

Lights will illuminate the Niswonger stage as the large twelve-piece ensemble of progressive rock's Wizards of Winter comes to life this Sunday at 7:00 PM. The audience will be transported away on a magical musical journey, with the live performance of The Christmas Dream, a collection of original, holiday-themed songs.

If you’re into Trans-Siberian Orchestra, Broadway musicals, Christmas music, and Rock N’ Roll, this is a performance that will surpass your expectations. The Wizards Of Winter have been brightening up the Christmas season since 2009. The band, comprised of members of Trans-Siberian Orchestra, Ted Nugent’s band, Blue Oyster Cult, Def Leppard, Styx, and others, blend together to deliver an energizing Christmas experience that will be long remembered.

This New Jersey-based ensemble has been touring for over a decade bringing their masterful talent to theatres and performing arts centers. Yes, It’s been a decade since The Wizards of Winter were formed a “one-time thing” to raise money for a struggling Frenchtown, New Jersey food pantry.

“It was the height of the recession, 2009,” recalls Scott. “The lines at the food pantry were getting longer, while the shelves were growing empty. My wife [vocalist/flutist] Sharon and I, along with another friend, Steve Ratchen, got together for a benefit performance. At the time, we had no intention of becoming a permanent band. The show was so successful, however, that one show became two shows, which became five and then 10 shows.”

In the beginning, the band covered Trans-Siberian Orchestra’s music and played traditional Christmas songs. When it was decided that The Wizards of Winter would become an annual tradition, however, Scott decided to compose original music. As for why he decided to forgo covering traditional, time-honored classics, Scott is boldly honest.

“Christmas music is eternal,” he says. “A lot of the holiday hits have been around since the forties. If you develop a holiday album and it contains a couple of classic tracks, the album is going to enjoy a long life. The average hard rock or metal album is forgotten soon after its release. Unless you are a diehard fan, you will never listen to that music again.”

Yes, this band creates original music. Their songs, however, are not completely devoid of holiday classics. Often, the band will tease snippets of Christmas favorites.

“I don’t know if anyone has ever used part of the Handel’s ‘Halleluiah’ chorus during a metal song,” the keyboardist laughs. “Part of the melody from our song ‘Handel’s Torch’ was inspired by the holiday favorite ‘Bring a Torch, Jeanette Isabella.’ I changed the timing of the original music and then mixed it with Handel’s Messiah. Sometimes, our songs are a mashup of traditional songs that Fred lays all of these guitars over.”

The Wizards of Winter are proud that they attract a mixed audience of children and adults. They are also ecstatic when they recognize returning families who have made experiencing the band’s shows a yearly tradition.

Scott smiles, “It’s incredible watching people aged eight to 80, singing along with our Christmas songs. It is a cool, often surreal feeling. We end the show with our own arrangement of ‘Hark! The Herald Angels Sing.’ The lights go up, people stand and start to sing. It’s an emotional moment even for us and we have been doing this forever. It hits you right in the throat.”

“When you are thousands of miles from home and you look out onto the audience and see people who know your music—your songs—and they are anxious to see you perform and then meet you, it is an amazing feeling,” explains Fred. “And, as a musician, it is a feeling you long for when it stops.”

The current line-up boasts an impressive pedigree. Gaynor and drummer John O’Reilly were both Trans-Siberian Orchestra members. Bassist Greg Smith played with Ted Nugent. Singer Karl Scully performed with Irish Tenors. And Steve Brown, in addition to playing with Trixter, has toured with Def Leppard. But their shows are more intimate than those performed by TSO, Manheim Steamroller, and other holiday-themed ensembles. Steve believes this is partly the result of playing in smaller theaters and not large arenas.

“Having played everywhere from large arenas to performing arts centers, I can say that at smaller venues, there will be awesome acoustics. You will hear this great musicianship and great vocals."

Ciao Med Spa is is proud to present this Van Wert Live Christmas masterpiece on Sunday, December 5 at 7:00 PM at the Niswonger Peforming Arts Center. Tickets can be purchased at vanwertlive.com or through the Box Office at 419-238-6722. There's just something special about memories that involve music. They seem to stay with us a bit longer. We hope you will make your Family Christmas memories at the Niswonger.